ROUND UP: DAY 4 AS IT HAPPENED

Another great day of football at St George's Park with four games and 13 goals for the spectators sitting in the sunshine.

Minne de Vos then entered the pitch from the substitutes bench and added a further two goals and Peter Kooij another as the final score stood at Netherlands 4-0 Northern Ireland.

The second game of the day saw Argentina get their first victory of the tournament with a win over Canada, which leave group D wide-open.

Matias Fernandez slotted the ball into an empty net from six yards out to make it 1-0 to Argentina. After a number of chances for both teams it was Matias Bassi who took his opportunity to double the lead for Argentina. The game ended Canada 0-2 Argentina.

Spectators for game three of the day saw six goals as Brazil beat Venezuela on a sunny early evening at St George’s Park.

The first goal came in the eleventh minute by the way of a penalty as Felipe Rafael was brought down inside the box. Evandro stepped up to score and a further five goals followed scored by Rafael, Igor, Jonatas and two from Carols who came on from the substitute bench. The game finished Brazil 6-0 Venezuela.

In the last game of the day the United States of America booked their place in the Quarter Finals of the Cerebral Palsy Football World Championships with a stunning 2-1 comeback victory over Scotland.

Paterson netted for Scotland in the fourteeth minute before an own goal by Halloran in the second half and Jahn for USA made it 2-1. The game ended USA 2-1 Scotland.

The Netherlands overcame a defensively tough Northern Ireland 4-0, thanks to a superb attacking performance from Minne de Vos in the second half.

The first 30 minutes saw the favourites the Netherlands unable to break down a brave Northern Ireland defensive unit, which was epitomised by the tireless display of defender Jordan Cush.

Towering striker Hendrik Rodenburg had the first chance of the game for the Netherlands in the 11th minute, but he saw his effort bounce back off the left post.

The goal frame yet again came to the aid of the Irish, as a Rodenburg side footed shot struck the post and left the Dutch frustrated.

Netherlands captain Lars Conijn tried to push his team in front with an across goal effort which for the third time in the match, hit the post and kept the Irish in the game.

For all the Netherlands probing, it took a 21st minute volley from Conijn to test Darren Lemon for the first time and the goalkeeper gathered the shot comfortably.

Conijn was bested again by the Northern Ireland keeper, thanks to a strong left handed save which stopped a shot that was heading straight for the top right corner.

A flurry of offense from Northern Ireland in the last minutes of the half showed that they were not content with settling for a draw. However, Dutch goalkeeper Stefan Boersma was a mere spectator in the first 30 minutes as the Netherlands defence dealt with any Irish attack with relative ease.

The start of the second half replicated that of the first, with the Dutch again on the front foot led by Rodenburg. The Dutchman missed a glorious headed chance to put his side in the lead and was soon replaced by substitute Minne De Vos.

De Vos had an immediate impact on the game, picking out teammate Jeroen Saedt in the box, who gladly slotted the ball home and opened the scoring in the 40th minute.

The substitute De Vos got himself on the score sheet after being gifted the ball in the 44th minute by Irish goalkeeper Lemon.

Northern Ireland’s battling spirit began to wane as the Dutch passed their way through and created chance after chance.

Peter Kooij added to Northern Ireland’s woes with a goal right on the 60th minute to make the score 3-0. Another Northern Ireland mistake near their own goal resulted in De Vos rounding off the scoring with another simple finish in the second minute of injury time, resulting in the match finishing 4-0.

The Netherlands will now be looking ahead to their match against Canada which could see them achieve maximum points, while Northern Ireland will face Argentina in their last group game.

Argentina boosted their hopes of Quarter Final qualification with a 2-0 win over Canada, a result that keeps group D wide-open.

Mariano Cortes tested the reflexes of make-shift goalkeeper Trevor Stiles in the seventh minute, the Canadian striker-come-keeper saved well at his near post to keep the game level.

The deadlock was broken in the tenth minute when Cortes crossed to Matias Fernandez, who slotted to ball into an empty net from six yards out to make it 1-0 to Argentina.

Sam Charron provided a rare surge forward for the Canadians halfway through the first-half, his cross was unable to find Vito Proietti at the back post, who had managed to find himself in a yard of space.

Rodrigo Lugrin had a chance to make it 2-0 eight minutes before the break, his left-footed effort deflected just wide of Stiles’ near-post – nothing resulted from the corner.

Five minutes later, Proietti had a chance to break clean though as Rodrigo Luquez let the ball roll under his foot. The Canadian attacker lacked concentration at the crucial moment and the opportunity was wasted.

Canada started to get back into the game by half-time as they threatened to equalise, Liam Stanley had the best opportunity when he almost met Matt Brown’s deep free-kick, but the ball sailed wide.

Argentina held for a 1-0 lead at the interval.

Matias Bassi stung the palms of Stiles with the first move of the second half, the Canadian defence cleared the loose ball.

Moments later, Proietti released Kyle Payne who was challenged by Cortes just as he was about to pull the trigger, Stanley hit wide from the resulting corner. It should’ve been a leveller.

A Cortes corner was met by Bassi who headed just wide. Both teams now guilty of missing opportunities to score from set-pieces.

Referee Scott Henry showed the first yellow card of the game to Dustin Hodgson after a cynical fowl on Bassi on the edge of the Canadian area. Lugrin’s free-kick could only find the gloves of Stiles.

Bassi atoned for his earlier miss by making 2-0 in the 41st minute, Lugrin laid it off to the goal-scorer who thumped home from the edge of the area.

Another chance went begging for Canada in the 44th minute, again from a set-piece, Charron delivered a precise free-kick to Stanley who missed from point-blank range.

Argentinian goal-scorer Bassi picked up a booking with ten minutes left on the clock, he brought down Dustin Hodgson in wreckless fashion with the referee not hesitating to show a yellow card. Bassi was subsequently replaced by Mariano Morana.

Proietti was again guilty of missing a golden opportunity to pull his side back into the game with 56 minutes on the clock, one-on-one with the keeper, he blazed his effort high and wide of Figuera’s goal.

Maxamiliano Fernandez replaced Rodrigo Luquez and Ezequiel Jamie replaced Pablo Molina late in the game.After four minutes of added time, the referee brought the game to a close with Argentina earning three crucial points in the race to qualify from group D.

Brazil produced an impressive display to comfortably sweep aside Venezuela 6-0, in their second game of the Cerebral Palsy World Championships.

The first half was dominated by a Brazilian side in red-hot form, despite resting key players such as Wanderson. It took 11 minutes for Brazil to make the breakthrough against a largely resilient Venezuelan side. Felipe Rafael was brought down inside the box after dispossessing Olivaraes Mora. Evandro stepped up to slot straight down the middle, which signalled the beginning of a bombardment on the Venezuelan defence from Brazil.

Felipe Rafael scored the best goal of the half, cannoning in from long range leaving 'keeper Pineda Teran with very little chance to get a hand to the strike. Igor and Jonatas completed the scoring to make it 4-0 at the break.

Venezuela had clearly set up to defend and had little opening in the first half, with the only real chance coming after Brazil ‘keeper Gilvano brought down Quintana on the edge of the box, but Olivaraes Mora was unable to make anything of the resulting free kick.

Venezuela got the second half underway and were able to suppress the Brazilian side throughout the opening ten minutes of the half, enjoying a spell of possession and keeping the score at 4-0. This lasted until substitute Jose Carols got his first of the game, capitalising on a mistake from Venezuelan ‘keeper Pineda Teran and calmly slotting away to make it 5-0.

Carols added a second soon after, rounding the emerging keeper after a sublime 20-yard pass from the increasingly impressive Evandro.

In truth, the half lacked the intensity that was present in the opening 30 minutes, allowing Venezuela a real opportunity through a long range strike courtesy of Felipe Quintana, only to be denied by a flying save produced by substitute ‘keeper Wesley.

Brazil continue to impress as they progress through the tournament, with an impressive attendance on this sunny evening, a sign of the quality football they are producing.

The United States of America booked their place in the Quarter Finals of the Cerebral Palsy Football World Championships with a stunning 2-1 comeback victory over Scotland.

Stuart Sharp’s men scored twice in the space of four minutes, to break Scottish hearts in what was a very entertaining encounter.

After a tense opening period it was Scotland who came the closest to opening the scoring, when in the sixth minute Kyle Hannin fired a low right footed effort against the post.

Six minutes later, the Scots came close again when Barry Halloran’s shot was palmed away by American goalkeeper Marthell Vasquez, luckily for the USA Adam Ballou was on hand to clear the danger.

Eight minutes later Jarret Razon worked his way into the Scotland penalty area to force an excellent point blank save from Craig Connell. The loose ball was picked up by Ian Paton who found Hannin, who ran at the American defence before squaring the ball to Scotland Captain, Jonathan Paterson, who calmly rounded Vasquez to give the Scots a deserved lead.

Both teams continued to press with Paterson forcing a good save from Vasquez, while Razon volleyed agonisingly over on the stroke of half time.

It didn’t take long in the second period for the Americans to equalise, when in the 35th minute Razon produced a teasing cross which Halloran cruelly diverted past Hannin. Four minutes later they took the lead when a mix up between Ian Paton and Connell left Seth Jahn with a simple tap in.

Scotland threw everything at their opponents, with Hannin forcing another good save from Vasquez while Martin Hickman also came close to an equaliser when he shot wide.

And with the clock ticking Vasquez was forced into action once more, this time denying Paton at his feet in the final minute.

The final whistle sparked wild scenes amongst the American players and coaching staff. They now face Brazil in their final group game to determine which team will win the group. 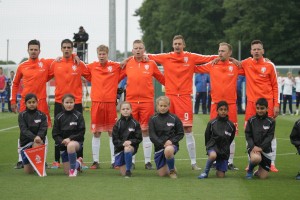 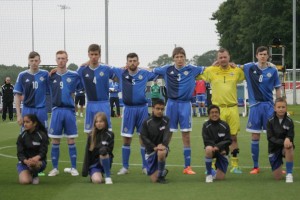 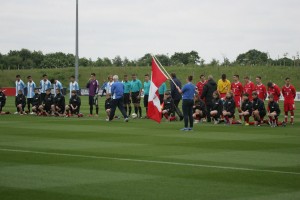 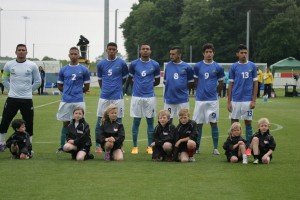 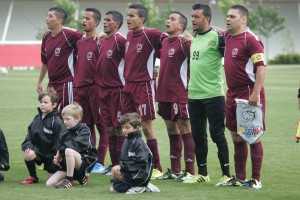 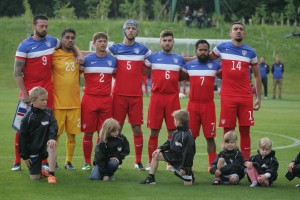 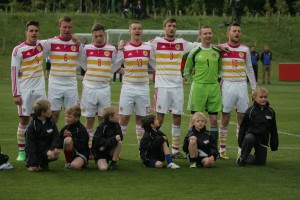