ROUND UP: DAY 3 AS IT HAPPENED

Big wins were the main talk of the day, as Russia and Ukraine go through to the Quarter Finals and the Republic of Ireland increase their chances of following them.

Russia started the third day of the Cerebral Palsy Football World Championships with a comprehensive victory over Portugal. Two goals from Sapiev and one each from Kuligin, Ramonov and Albegov saw the Russians take a four goal lead into the half time break.

The dominance of Russia continued in the second half and further strikes from Chesmin. Borkin, Potekhin, Pagaev ensured a victory which sent them through to the Quarter Finals, with the final score standing at Russia 9-0 Portugal.

David Barber pulled a goal back for the Australians at the mid point of the second half, however Eric O'Flaherty added a third goal for the Republic of Ireland before Sheridan struck his second of the game to ensure a final score of Australia 1-4 Republic of Ireland.

The final match of the day saw the largest victory of the tournament so far, as Ukraine put 16 goals past Japan. By half time the Ukraine side had all but confirmed victory with six goals from Volodymyr Antoniuk and further strikes from Sheremet and two for Krasylnykov giving them a dominant lead.

Seven more goals were to follow in the second half, with two a piece for Atoniuk and Krasylnykov and a second half hat-trick for Romanchuk completing the victory, with the match ending Ukraine 16-0 Japan.

Reigning World Champions Russia progressed through to the Quarter Finals of the competition with a crushing 9-0 defeat of Portugal at a sun soaked St. George's Park.

It did however take the Russians 17 minutes to break the deadlock as Portugal, very much penned back in their own territory, managed to successfully contain the threat of their opponents with some resolute defending inside the first quarter of an hour.

And Russia, number one in the World Rankings, were becoming increasingly frustrated by the very clearly choreographed defensive strategy being expertly executed by the Portuguese during the initial stages.

The closest they came to taking the lead was when Portugal defender Ricardo Franca cleared off the line before the subsequent rebound struck the outside of the post and went out for a goal kick.

Shortly after, Russia hit the woodwork again. This time it was captain Ivan Potekhin who came agonisingly close to giving Russia what would have been a deserved lead.

Eventually Vasco Miguel Santos Ferreira’s resilient team capitulated as Russia produced a flurry of goals with four in as many minutes.

It was Alexander Kuligin who made the all important breakthrough for the Group B table-toppers. Potekhin squared the ball to Ramonov, who played in Kuligin to make it 1-0 from close range.

And almost immediately after, Russia doubled their advantage as Ramonov changed from provider to scorer following a neat interchange with Dmitrii Pestretsov inside the box.

Sapiev then put the game to bed with a third just a minute later, before Albegov added a fourth from the penalty spot. Lucas Pinheiro brought down Pestretsov inside the area, leaving referee Ashley List with little choice but to point to the spot and Albegov confidently smashed the ball into the left-hand side of the goal.

And just prior to half time, Sapiev claimed his second goal of the game after receiving the ball from substitute Pagaev across the four yard box to finish so close to the goal that it would have been impossible to miss.

Russia continued to dominate possession in the second half, gradually sapping the energy out of the Portuguese, who became increasingly fatigued as the half went on.

But, just like the beginning of the first-half, the 2012 Paralympic winners initially found it difficult to break down the Portugal defence with goalkeeper Telmo Baptista making a string of excellent saves to deny the persistent Russian attack from adding to their tally.

Russia soon found a way through and following a brief scramble inside the Portugal box, substitute Alexey Chesmin found the back of the net from close range to make it 6-1.

They completed the victory with Borkin, another Russia substitute, Potekhin and Pagaev scoring in the latter stages of the match to ensure another huge scoreline following their 8-1 thrashing of Ireland in the first match.

Russia will now seek to consolidate top spot with maximum points when they play Australia in their final Group B fixture, whilst Portugal will be searching for a first win of the competition against the Republic of Ireland after enduring a hugely disappointing campaign thus far.

This game saw the two teams potentially vying for the second spot in Group B come together. Australia went with the same starting 7 from their opening game, a 2-0 win over Portugal. However there were 4 changes to the Republic of Ireland team following the 8-1 defeat to Russia in their first group game.

Ireland dominated for long spells of the game and with goals from Sheridan (2), along with one a piece from Gary Messett and substitute Eric O’Flaherty they won convincingly by a score line of 4-1.

A bright opening to the first half saw the Republic of Ireland have a number of early chances, with Moran heading over the bar from a cross delivered by Messett. Shortly after Messett fired just wide of the post before the deadlock was broken in the 9th minute. Messett collected the ball on the half way line and advanced up the middle of the pitch. His shot from the edge of the penalty area squirmed through the despairing keeper’s legs and into the net.

Ireland continued to dominate possession, with McKee hitting the bar with a shot from the edge of the box and a well worked free kick resulted in the same player firing just wide of the target.

Australia defended resolutely for the remainder of the half but were unable to create any real openings of their own.

The second half saw Sheridan hit an effort well wide before wild celebrations were sparked in the stands when the Pararoos supporters wrongly believed that a deflected shot from Goodman had gone in but it had instead landed on top of the goal.

Within minutes a left footed strike by Ireland’s Sheridan from just inside the Australian’s half nestled in the bottom right corner of the net to double Ireland’s lead.

In the 48th minute Australia were awarded a penalty following a clumsy challenge by Irish captain, Luke Evans on his Aussie counterpart, David Barber. The Aussie skipper took the spot kick himself and scored to halve the deficit.

Soon after the restart Sheridan hit the bar with a rasping drive, however within a minute substitute O’Flaherty had restored Ireland’s two goal advantage, coolly slotting the ball under the keeper’s body.

The Irish comfortably saw out the remainder of the game and in added time Sheridan scored his second goal of the game with a well struck shot.

The result means that going into the final group games on Saturday both teams are level on three points and still havr the possibility of finishing second in the group behind Russia.

European Champions Ukraine got their Cerebral Palsy Football World Championships campaign off to a flying start with a crushing 16-0 win against Japan.

Captain Vlodomyr Antoniuk led the way with an astonishing eight goals, while Artem Krasylynykov and substitute Vitalli Romanchuk chipped in with four and three goals respectively. Artem Sheremet added the other in the resounding victory.

It took just two minutes for Antoniuk to open his account when he tapped in from close range after Japan goalkeeper Hideyuki Yanagi parried Taras Dutko’s long range effort.

Antoniuk doubled his tally moments later when he latched on to Vitaly Trushhev’s pass.

The skipper then turned provider when Artem Sheremet turned in his left wing cross for the third in the eighth minute.

Japan defended bravely but their resistance only lasted a further 12 minutes as Antoninuk completed his hat-trick, beating two defenders before slotting past Yanagi.

Artem Krasylynkov scored two, either side of an Antoniuk quick-fire treble. The skipper added his seventh in stoppage time to give Ukraine a nine goal cushion at the break.

Antoniuk made it 10-0 from close range five minutes into the second half.

Romanchuk got his first after being supplied by fellow substitute Edhar Kahramanian. Both Antoniuk and Romanchuk added two more goals, before Kraslynykov sealed his hat-trick, calmly picking his spot and beating Yanagi from inside the penalty area.

A flowing move ended when Romanchuk slotted home from close range to make it 15-0, to complete his treble after 53 minutes. Krasylnykov completed the scoring in the final minute when he diverted Kahramanian’s effort past Yanagi.

This match emphasised why many are tipping Ukraine to win the tournament and sets up a mouth-watering clash with host nation England, who beat Japan 14-0 in their opening game. That match takes place on Saturday and will determine which team finishes top of group A. 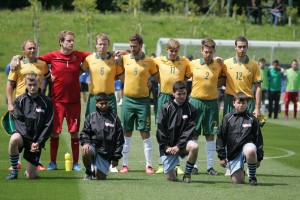 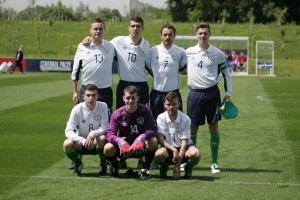 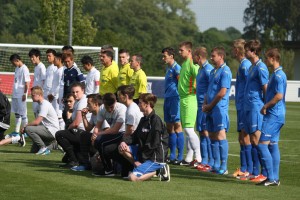