ROUND UP: DAY 2 AS IT HAPPENED

Fourteen goals on the second day of the Cerebral Palsy Football World Championships as all of the teams complete their first round fixtures.

The second day of competition got underway with Kevin Hensley starring as the USA took on Venezuela.

Hensley scored his first after 15 minutes and grabbed another early in the second half to give the USA breathing space. Venezuela looked to respond, however Boarman rounded off the what in the end was a comfortable victory, ending USA 3-0 Venezuela.

Scotland could have pulled a goal back after the break, but were denied by Gilvano in the Brazil goal and a further two finishes from Jose Carlos and one from Jonatas ensured the match ended Brazil 6-0 Scotland.

Canada and Northern Ireland faced off in the third match of the day and it took only 10 seconds for the Dustin Hodgson to put Canada in front. Northern Ireland hit back at the beginning of the second half with Cormac Birt equalising, however 5 minutes later Trevor Stiles had the Canadians back in front.

The Northern Ireland goalkeeper had the busier match and Canada added a third goal when Sam Charron capitalised on his sides dominance, with the match finishing Canada 3-1 Northern Ireland.

The final game of the day saw a hotly contested match between the Netherlands and Argentina. Minne de Vos and Iljas Visker had the Netherlands two goals ahead within 16 minutes, but Argentina came back into the game with Bassi grabbing a goal back just before half time.

Two quick fire goals midway through the second half from Visker and Conijn ended any hopes of an Argentinian comeback as the match ended Netherlands 4-1 Argentina.

Hensley bagged a brace as USA defeated their South American counterparts 3-0. Bryce Boarman notched the other goal for the Stars and Stripes.

USA were ahead inside 15 minutes when Adam Ballou and Hensley combined resulting in the latter firing home from distance with the aid of a slight deflection.

The Venezuelans looked to hit back immediately; Jose Luis Felipe Quintana tricked his way into the area before arrowing a shot towards the top corner, but USA goalkeeper Keith Johnson was on hand to produce a terrific save and preserve the lead.

Venezuela continued to force the issue in search of an equaliser and were almost rewarded shortly before half-time; Jessi Junior Yari Villegas’ cross found the head of Daniel Enrique Sanchez but his glancing effort dropped narrowly wide of the far post to ensure that the Stars and Stripes held a slender advantage at the interval.

USA doubled their lead shortly after the break following a devastating counter attack. Tyler Bennett released Ballou down the left flank, he fed Hensley, whose unerring finish nestled into the bottom corner.

Bennett was in the thick of the action in the build-up to USA’s third goal. His drive from distance was parried by Frank Renee Pineda Teran , but Boarman was well-positioned to gift his country an unassailable lead.

However, USA saw the game out relatively comfortably and began their campaign with a victory.

The talismanic forward, rated by many as the best in the world, scored and assisted a further four goals as Brazil stormed to the top of the group.

Jan Francisco, Fernandes, Jose Carlos (2) and Jonatas scored the other goals as Brazil laid down the gauntlet to the rest of the competition.

It didn’t take the Samba Boys long to assert their authority on proceedings. Jan Francisco exchanged passes before receiving the ball back from Wanderson, he then unleashed a fierce drive into the top corner from distance leaving Scottish goalkeeper Craig Connell helpless.

Wanderson almost got his own name on the scoresheet when he produced a wonderful piece of skill to outwit his opponent, but his looping effort clipped the top of the crossbar.

Jan Francisco was next to be denied by the woodwork. His left-footed effort from the edge of the box rattled the crossbar before bouncing to safety.

Brazil doubled their lead when Wanderson found the on-rushing Fernandes inside the box. He controlled the ball before lashing it past Connell.

Wanderson finally added the goal that his tremendous first-half performance deserved when he jinked past Thomas Brown on the edge of the area before drilling a shot into the far corner to put Brazil in a commanding position going into the break.

The Scots almost pulled a goal back just after the interval; Mark Robertson broke away before sliding Jamie Mitchell through on goal, but he was thwarted by substitute keeper Gilvano.

The woodwork continued to feel the wrath of the Brazilians. Wanderson hammered an indirect free-kick onto the outside of the post with just over 10 minutes remaining.

Brazil added a fourth in the 52nd minute; Fernandes found the hugely effective Jose Carlos, who made no mistake with the goal gaping.

Creator-in-chief Wanderson produced some sublime skill down the right-hand side before pulling back forJonatas to tap home.

Wanderson assisted his fourth goal of the match when he released Jose Carlos, who fired into the far corner to complete his brace.

This comprehensive victory lifts Brazil into first position ahead of USA, who defeated Venezuela earlier in the day.

Canada got their campaign off to a solid start, with goals from Dustin Hodgson, Trevor Stiles and Sam Charron securing victory over Group D opponents Norther Ireland.

The Canadians got off to a blistering start with Captain Dustin Hodgson capitalising on a mistake from Northern Ireland keeper Darren Lemon and firing his side in front just 10 seconds into the match.

Alan Crooks’ side then had to quickly regain composure following the early set-back. They struggled, however, to find a slick passing rhythm and to get a foothold in the game as the world number 11s dominated the opening stages.

Ryan Walker sought to get his side back on level terms immediately but was denied by Damien Wojtiw’s brave goalkeeping. Canada’s No1 swiftly moved off his line to smother the ball but collided with the Irish forward in the process and required treatment. He was soon back on his feet though and marshalling his troops much to the delight of the crowd at St. George’s Park.

Chances were few and far between for Northern Ireland and their best opening in the first half fell to Cormac Birt, whose venomous drive flashed just wide of the left upright.

The dynamic duo of Liam Stanley and Trevor Stiles both proved a thorn in the Irish defence, linking up well and carving out numerous opportunities to extend their side’s advantage. Stanley danced his way into the penalty area but failed to coolly and clinically slot home before Stiles’ low driven cross across the face of goal was just calling out for the slightest of touches.

The game was delicately balanced at the break with Northern Ireland presumably the happier of the two sides, having kept the Canadians at bay after their early opener.

Whatever Crooks said at half-time inspired his team and worked wonders as they levelled the score with the first chance of the second half. The referee awarded a free-kick to Northern Ireland for handball on the edge of the area and Cormac Birt stepped up to drill the ball past Wojtiw and into the top right corner of the net.

Darren Lemon was the busier of the keepers, pulling off a fine save after the equaliser to prevent Canada from restoring their previously long-held lead. He was then called into action once again shortly afterwards, blocking well from Sam Charron, but there was nothing he could do to stop Trevor Stiles from getting his name on the scoresheet in the 37th minute.

Canada continued to gradually crank up the pressure on the opposition but Northern Ireland weren’t without their opportunities to salvage something from the game. Ryan Walker was guilty of spurning a great chance, finding the side netting, after being picked out at the back post by a pin-point cross.

He was then made to further rue his miss when Charron latched onto a sublime Stiles through ball in the 47th minute and rewarded his side’s dominance with a two-goal cushion.

Drew Ferguson’s side will now aim to build on their impressive display when they face Argentina on Friday. On the other hand, Northern Ireland will hope to get their first points on the board in their second match of the tournament. They are set to face a stern test though against the Netherlands, who are currently ranked 4th in the world.

The Netherlands prevailed 4-1 over Argentina in the battle of the Group D heavyweights, courtesy of Minne De Vos, Iljas Visker (2) and Lars Conijn.

Although Argentina bossed the opening exchanges, threatening from a series of set-pieces taken straight off the training pitch, it was the Netherlands who broke the deadlock in the 11th minute with a well-worked team goal. Minne De Vos finished off a slick passing move, slotting home past Claudio Figuera.

The Netherlands could have doubled their advantage minutes later. Jeroen Saedt used his pace to get in behind the Argentine defence but failed to capitalise when presented with a golden opportunity.

Iljas Visker then displayed some silky skills, beating two Argentina players before curling the ball into the back of the net to make it 2-0 in the 17th minute.

Marcel Geestman’s side then had to weather a sustained period of pressure as Argentina tried to find their way back into the game. George Van Altena was equal to Rodrigo Lugrin’s effort before two defenders put their bodies on the line to block the follow-up and preserve their advantage.

Their resilience was broken in the 27th minute though as Matias Bassi’s powerful drive from outside the area reduced the deficit.

Despite conceding, the Dutch side were undeterred and Claudio Figuera had to be alert to prevent Iljas Visker, who was involved in all of the Netherlands’ promising attacking moves, from immediately restoring his side’s 2-goal cushion.

Argentina were on top at the end of the first half and could have gone into the break on level terms but Pablo Molina blazed over with the goal gaping after Van Altena failed to deal with an attack.

The crowd at St. George’s Park thought that the side ranked sixth in the world had successfully pegged their opponents back in the 37th minute. Matias Fernandez connected sweetly with the ball and many thought it had flown just inside the post but it had actually skimmed the side netting.

With 15 minutes left to play, the Netherlands scored two goals in quick succession to give them breathing space and a 4-1 lead. Iljas Visker grabbed his second of the game with an absolute corker of a free-kick before his side turned defence to attack with ease and Lars Conijn was on hand to tap home.

Osvaldo Jorge Hernandez’s side continued to press but didn't make the most of the minimal chances they were afforded and were unable to stage a comeback. They found themselves stretched at the back in the closing stages as the Netherlands exposed the fact that they were pushing forward in numbers.

The Netherlands will now be aiming to make it two wins out of two when they take on Northern Ireland on Friday while Canada will provide the next test for Argentina. 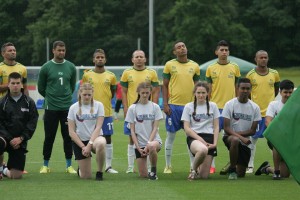 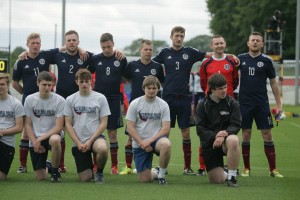 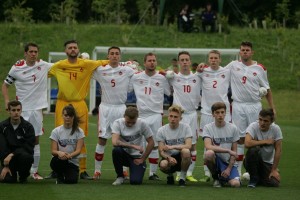 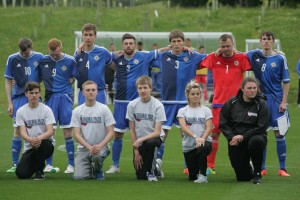 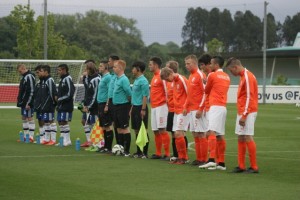