ROUND UP: DAY 5 AS IT HAPPENED

The final group games commenced today with teams in Group A and B completing their matches and finding out if they have progressed through to the Quarter Finals and who they will play in their next games. The first two games kicked off at 1pm and saw Russia and the Republic of Ireland both winning.

Russia rounded off their final Group B game in style with goals from Eduard Ramonov, Alexander Kuligin, Lasha Murvanadze, Alexey Tumakov and Alexey Chesmin condemning Australia to a 5-0 defeat.

The result means that Russia top group B and Australia finish in 3rd place. The final score was Australia 0-5 Russia.

The Republic of Ireland booked their place in the last eight of the Cerebral Palsy Football World Championships, after an 8-0 rout against Portugal in front of a great following of travelling supporters.

Dillon Sheriden netted four of the eight goals, with Messett two goals and Snell and Evans with one goal each. The game also saw the first red card of the tournament with Referee, Hayley Ives showing a second yellow to Portugal’s Oliveira for a cynical foul on Aaron Tier. The game ended Republic of Ireland 8-0 Portugal.

The last game of the day featured the host nation England who suffered their first loss against Ukraine in a tightly contested match. This Group A clash played in front of a bumper crowd saw England make one change to the team which started in the emphatic win over Japan on Tuesday with George Fletcher coming in for Jake Brown. Meanwhile Ukraine made two changes, Oleh Len replacing Artem Sheremet and Kostyantyn Symashko switching with Bohdan Kulynych in goal. The atmosphere prior to kick off was electric with the expectant home crowd making their voices heard despite the rainy conditions.

The only goal of the game came from Ukraine breaking quickly down the right side and Len’s precise cross was met by Antoniuk who slotted the ball home from close range. The game ended England 0-1 Ukraine.

Today’s results mean that Russia top Group B and will face England, who finished second in Group A, in the Quarter Finals. Finishing second in Group B, the Republic of Ireland have set up a tantalising tie with Ukraine who topped Group A.

The Republic of Ireland booked their place in the last eight of the Cerebral Palsy Football World Championships, after an 8-0 rout against Portugal.

The dynamic duo of Gary Messett and Dillon Sheriden were too much for the Portuguese to handle, as the pair provided a first half masterclass, with Sheriden grabbing four goals and Messett oozing quality throughout, before the two earned a well-deserved rest in the second half.

Finishing second in the group, the Irish have set up a tantalising tie with the winner of Group A, which will be decided later today as England face Ukraine in the first place play-off. Whoever it is, they will be warned after this destructive attacking display from Ireland.

The Irish got off to the perfect start, scoring inside the opening minute. A clever switch of play gave Darragh Snell the chance to play in the former European Player of the Year, Messett, who confidently stroked home from close range.

Messett then showed exactly why he’s considered one of the best players in CP football. A thunderous strike from range left Portuguese keeper, Telmo Baptista with no chance. The shot finding the bottom corner brilliantly to give Ireland a two-goal advantage within four minutes.

Ireland made it three just moments later, Messett turning provider this time, slicing through the Portuguese defence with a sublime pass to find Dillon Sheriden, who sold the keeper and curled the ball into the top right-hand corner.

Sheriden and Messett were linking up well. After a short lull in play, the two combined twice in the space of two minutes to add a fourth and fifth in identical fashion, with Sheriden scoring both to complete a 13 minute hat-trick. A splendid pair of through balls from Messett found the youngster in acres of room, who had all the time in the world to round the keeper twice, pick his spots and put the game to rest.

Portugal conceded a sixth in the 29th minute. An audacious cross from Sheriden found an unmarked Snell at the back post, who had the simplest job of nodding into an empty net.
It was then seventh heaven for Ireland before the break, as Luke Evans found Sheriden on the edge of the box, who swept in his fourth of the match, much to the delight of the Irish contingent in the stands.

The pace of the game took a hit in the second half, as Sheriden and Messet were rewarded with a break after their fine work, being replaced by Aaron Tier and Ryan Nolan.
Ireland dominated the remaining 30 minutes, with Portugal rarely venturing into the Irish half, and in the 54th minute Ireland earned a penalty after an inexcusable handball from Ruben Oliveria, who as shown a yellow. Baptista parried Evans’ spot kick, but unfortunately it was straight back into the path of Evans, who blasted in the rebound to complete the 8-0 demolition.

Referee, Hayley Ives then brandished the first red card of the tournament, showing a second yellow to Oliveira for a cynical foul on Aaron Tier to cap off a miserable afternoon for Portugal.

Russia rounded off their final Group B game in style with goals from Eduard Ramonov, Alexander Kuligin, Lasha Murvanadze, Alexey Tumakov and Alexey Chesmin condemning Australia to a 5-0 defeat.

Australia had their backs to the walls from the off and it was unsurprising when reigning Champions Russia took the lead just four minutes into the game. Eduard Ramonov made a storming run through the centre before unleashing a powerful drive past Christopher Barty.

Alexander Kuligin doubled his side’s lead moments later, slotting home from close-range after being picked out by Viacheslav Larionov.

The Aussies could have fallen even further behind but the woodwork came to their rescue as Dmitrii Pestretsov’s venomous strike rattled the crossbar in the 8th minute.

Russia’s quality was exuding all over the park and the Kai Lammert’s side, who were battling against the Republic of Ireland to secure second place in Group B, were struggling to keep them at bay. Russia Captain Lasha Murvanadze drove home from the edge of the area in the 14th minute to put his side 3-0 up.

Without a shadow of doubt, Barty was the busier of the two keepers and pulled off a string of fine saves to prevent his side from falling further behind.

Avtandil Baramidze’s team were enjoying the bulk of the possession as Australia struggled to find their rhythm and lacked composure, conceding possession too easily on numerous occasions and failing to capitalise on the few chances they were afforded. Cameron Gudgeon raced clear down the flank but his pull-back was intercepted as Russia quickly and effortlessly turned defence to attack.

Pestretsov was proving a real handful and was denied from getting his name on the scoresheet before the break, first by a fine Barty one-handed save and then by the woodwork as he drilled the ball into the middle of the crossbar.

55 seconds into the restart Russian substitute Alexey Tumakov made an immediate impact, firing Russia 4-0 ahead with his first touch of the game.

Shortly afterwards, Australia enjoyed a stroke of luck as Tumakov came close to bagging a quickfire double. His strike ricocheted off the inside of both posts before being scrambled to safety by the Australian defence.
Second half substitute Alexey Chesmin then added to the 2012 Paralympic Champions’ tally as his deflected effort piled further misery on the Australians.

The result means that Russia top the group and will face either England or Ukraine in the quarter-finals. Australia will have to wait to discover their next opponents after finishing in 3rd place.

This Group A clash played in front of a bumper crowd saw England make one change to the team which started in the emphatic win over Japan on Tuesday with George Fletcher coming in for Jake Brown. Meanwhile Ukraine made two changes, Oleh Len replacing Artem Sheremet and Kostyantyn Symashko switching with Bohdan Kulynych in goal.

The atmosphere prior to kick off was electric with the expectant home crowd making their voices heard despite the rainy conditions.

Ukraine’s Len saw an early shot sail over the bar as they dominated the early exchanges. On 4 minutes another Ukrainian chance was comfortably saved by England keeper, Giles Moore. England’s game plan appeared to be to try to hit the opposition on the break and in the 9th minutes this almost paid dividends for them as Matt Crossen’s rasping drive, drifted inches wide of the post.

Soon afterwards Emyle Rudder went down inside the box but was promptly shown the yellow card for simulation.

In the 15th minute a tame shot from Ukraine’s Antoniuk was gratefully taken by England stopper Moore. However shortly afterwards the Ukraine broke quickly down the right side and Len’s precise cross was met by Antoniuk who slotted the ball home from close range.

For the remainder of the half Ukraine enjoyed long spells of possession and would have doubled their lead if Molodtsov goal bound shot hadn’t hit his team mate on the line. In added time at the end of the half England almost equalised with George Fletcher’s corner from the left headed just wide by Crossen

The second half began with England’s Rudder charging down the left wing only to be fouled close to the corner flag by Trushev. Rudder was unable to continue and was replaced by Martin Sinclair who was booked almost immediately following a last ditched lunge and James Blackwell soon followed him into the referee’s notebook.

The large crowd became more vocal but it was Ukraine who came closest to scoring next when Trushev took a shot from distance.

In attempt to find an equaliser, England adopted a direct approach and it almost paid off as Crossen expertly controlled Rutter’s long pass and played the ball across the box but there was no other English player able to get on to the end of it.

On 50 minutes Moore made a great save diving down to his left to block a strike from Len before parrying a close range shot from Ukrainian substitute Romanchuk moments later for a corner.

Ollie Nugent came on for skipper Jack Rutter and Jake Brown replaced James Blackwell as England tried desperately to find an equaliser. However Ukraine saw out the 5 minutes of injury time and the game finished 1-0 to the current European champions.

The result means that England finish second in Group A and will now have a quarter final showdown with current Paralympic champions on Wednesday afternoon whilst Ukraine will meet Republic of Ireland later on the same day. 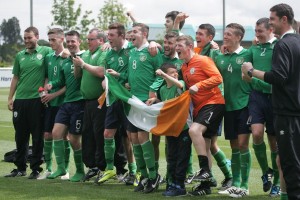 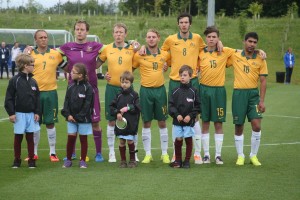 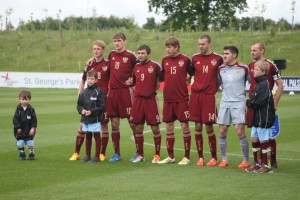