IPC President Sir Philip Craven speaks about his confidence for the Games to mark 500 days to go.

To mark 500 days to go until the Rio 2016 Paralympics on 26 April, the International Paralympic Committee (IPC) announced that it expects the Games to break all TV viewing records and exceed a cumulative global audience of four billion people for the first time.

Around 4,350 athletes from 170 countries are expected to compete in 428 medal events across 22 sports at the Rio 2016 Paralympic Games which take place between 7-18 September.

And, according to IPC President Sir Philip Craven, athletes will perform in front of the biggest TV audience ever for a Paralympic Games, beating the 3.8 billion cumulative viewers who tuned in for Beijing 2008 and London 2012.

“With 500 days to go until the Rio 2016 Paralympics we have far more broadcasters signed up to show the Games than we did at this stage for London 2012.  This underlines the rapidly growing interest broadcasters have in covering the Games and showcasing the abilities of Paralympians to their audiences,” said Sir Philip.

“At this stage for London 2012 the only broadcaster we had signed to show the Games was British broadcaster Channel 4.  In comparison for Rio 2016 we already have a number of major markets covered. Over the coming weeks and months we will be working hard to secure coverage in those territories which have yet to agree a deal to ensure the widest possible global audience has the opportunity to watch the Games.

“Channel 4 led the way for London 2012 and they continue to be a great supporter of Paralympic sport. What they delivered for London highlighted to other broadcasters the fantastic potential of the Paralympic Games and I think we are reaping the benefits as we approach Rio 2016.

“We now have agreements in place in the USA with NBC, Canada with CBC and American Movil for Latin America to show more Paralympic coverage than ever before; three huge territories that really did not cover too much of London 2012.

“In addition, Australia’s Seven Network, the country’s most watched broadcast platform, has said it will show a record amount of  live coverage each day, whilst NHK in Japan and many of the European Broadcasting Union (EBU) member countries have committed to dedicating more airtime than ever before to the Rio 2016 Paralympic Games.

“Later this year the domestic deal for Brazil will be concluded and all such agreements open up the Games to far more people than ever before. I am fully confident that the Rio 2016 Paralympic Games will break the four billion cumulative global viewers barrier for the first time, a huge achievement and testament to the growth of the Paralympic Movement.

Aside from the growing interest from broadcasters, Sir Philip Craven also believes there is mounting excitement towards Rio 2016 and that South America’s first Paralympics will build on the success of London 2012.

“For the last two years people have talked about the success of London 2012 and rightly so, they were the best Games ever.  However, I now feel the tide is slowly turning and everyone from athletes to the media is focussing on and talking about their excitement for Rio 2016.

“No two editions of the Games are ever the same, each brings their different qualities and I am confident that Rio 2016 will not just be transformational for Brazil, but for the whole of Latin America.

“You only have to look at what impact London 2012 had on Great Britain, to realise that such seismic changes could take place across a whole continent as a result of Rio 2016.

“Over the next 500 days we will be working with everyone involved in Rio 2016 including the Organising Committee, National Paralympic Committees and International Federations to make sure no stone is left unturned in delivering a great Games in Rio.

“I am confident the athletes will arrive as the best prepared ever and will deliver awe inspiring performances in front of a record breaking global TV audience. From this September we will also be working flat out with all delivery partners to sell as many tickets for the Games as possible to ensure the venues are full of passionate sports loving spectators.” 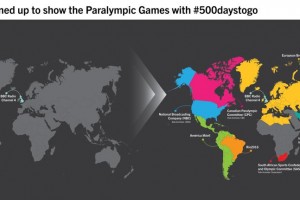