ROUND UP: DAY 7 AS IT HAPPENED

Day 7 and we saw the start of the positional fixtures with three matches of six teams competing and Australia getting a bye into the next round.

The positional fixtures include the teams that finished in the last two positions in the groups and the losing teams from the Quarter Finals to determine the final position within the whole tournament.

First up and we saw Canada take on Venezuela who came from behind to take the victory. Jessi Junior Yan Villegas scored in the 20th minute to give Venezuela the lead.

In the second half Canada carried out their comeback with a double from Trevor Stiles. Venezuela’s Jose Luis Felipe Quintana saw red after two yellow cards in the 56th minute and Canada’s Matt Gilbert was sent off after the final whistle. The game ended Canada 2-1 Venezuela.

At 1pm Scotland took on Northern Ireland in a clash between two of the home nations. Under the St. George’s Park sunshine, Scotland broke the deadlock in the fifth minute with a goal from Jamie Mitchell.

Northern Ireland’s Jordan Walker scored his second goal of the tournament in the 11th minute as he capitalised on a loose ball on the edge of the Scotland area and thumped it into the bottom corner to make it 1-1. Scotland replaced goalscorer Jamie Mitchell with Mark Robertson with 15 minutes to play – four minutes later the substitute won a free-kick, picked himself up to take it and fired home to give his side a 2-1 lead going into the last 10 minutes. He game ended Scotland 2-1 Northern Ireland.

In the final game of the day Portugal was victorious over Japan in a match of two halves. The European side eventually ran out 6-2 winners, but despite dominating the first half ultimately the result flattered as a spirited second half performance by Japan mean they finished the game with distinction.

Despite neither team having scored prior to the game, both sides went into the game sensing a realistic chance of grabbing a first victory at the tournament. Goals from Tiago Ribeiro Baptista Ramos (3), Pedro Filipe Fernandes dos Santos, Tiago, Hugo Manuel da Silva Pinheiro, Vítor Emanuel Ribeiro Vilarinho for Portugal and Taisei Taniguchi and Tetsuya Toda for Japan was watched in front on an animated crowd at St. George’s Park.

The results of the day mean that Northern Ireland get a bye into the next round of positional matches, Venezuela will play Japan, Scotland will take on Australia and Canada will play Portugal. All games will be played on Thursday 25 June.

A Trevor Stiles double helped Canada come from behind to achieve a 2-1 victory over a valiant Venezuelan side.

The South American team were unlucky not to register their first win of the tournament after Jessi Junior Yari Villegas put his side in front in the 20th minute.

Villegas was a constant thorn in the side of the Canadian defence straight from the start, and he eventually broke through the opposition backline to give Venezuela their first goal of the tournament.

Canada found it tough to break down a combatant Venezuelan defence which was marshalled by captain Daniel Enrique Sanchez.

Vito Proietti had a glorious chance to put Canada level in 28th minute, but his effort sailed over the crossbar.

The second half saw Trevor Stiles move outfield and Yuri Woodfall take his place in the Canadian goal.

The change proved to be a masterstroke from Canadian coach Drew Ferguson, as Stiles’ towering presence added another dimension to the Canadian attack.

Stiles got his side level in 36th minute through a ferocious volley which left the Venezuelan goalkeeper helpless.

Tireless striker Sam Charron tried to push Canada into the lead by running the fall length of the pitch only to be thwarted by the opposition’s defence.

However, Stiles was again the hero for Canada, scoring a 44th minute goal which gave his side a 2-1 lead.

Venezuela were dealt another blow in the 56th minute after Jose Luis Felipe Quintana received another yellow card leaving his team with a mountain to climb.

Canada comfortably saw out the rest of the game as Venezuela struggled to replicate their superb first half performance.

Matt Gilbert was shown a red card after the final whistle.

The North American side will now be anticipating a clash against the winner of Japan v Portugal, while Venezuela will be hoping to gain their first win of the Championships against the loser.

Scotland set a date with Australia after beating Northern Ireland 2-1 in a clash between two of the home nations.

The winners of that contest will then take on one of Canada, Japan or Portugal in the 9/10th play-off.

Before looking forward to a potential top ten finish they will be relieved to have come through a close encounter with their neighbours from across the Irish Sea unscathed.

Under the St. George’s Park sunshine, Scotland broke the deadlock in the fifth minute.

Jonathan Paterson launched a long ball up-field, Kyle Hannin laid the ball off to Jamie Mitchell, who placed neatly into Conor Lewsley’s net to give them an early advantage.

There could have been a second for Scotland in the ninth minute, Hannin and Jordan Cush battled as the ball floated over the top but the Northern Ireland keeper prevented his team from going further behind.

Jordan Walker scored his second goal of the tournament in the 11th minute as he capitalised on a loose ball on the edge of the Scotland area and thumped it into the bottom corner to make it 1-1.

Blair Glynn got his head to a Mitchell corner as the clock hit the 20-minute mark, Lewsley instinctively raised his left hand and prevented the ball from flying into the top corner – and many in the crowd thought it was in.

Cormac Birt arrived late into a challenge with Paterson and referee Tom Elliott deemed it worthy of a yellow card for the Northern Irishman. The resulting free-kick was well saved by Lewsley once again.

The longer the half went on the more Scotland started to dominate, a flurry of corners and a succession of half-chances before the break were not utilised and the sides were level at the interval.

Barry Halloran replaced Blair Glynn for the Scot’s at the break.

Scotland started the second half in the same way they finished the first – on the front foot.

Paterson and Halloran hit the post in the space of a minute, the latter of whom had the better of the two opportunities.

Birt had a dig from 20 yards on the 40 minute mark, it was on target but a comfortable save for Connell and the first time he had touched the ball in the second half. Christian Canning replaced Birt shortly after.

Jordan Walker threatened to put Northern Ireland ahead against the run of play in the 45th minute. His header from a David Leavy’s corner floated just over the bar.

Scotland replaced goalscorer Jamie Mitchell with Mark Robertson with 15 minutes to play – four minutes later the substitute won a free-kick, picked himself up to take it and fired home to give his side a 2-1 lead going into the last 10 minutes.

Halloran had the chance to add a third shortly after, he beat the defender and placed a shot towards the bottom corner but the keeper was equal to his effort.

Northern Ireland made an attacking change with five minutes left on the clock.

Ryan Walker had the last opportunity of the game as all the Northern Ireland team pushed up for a set-piece in injury time.

Lewsley had an effort that was well saved by his opposite number one, the rebound fell to Walker who blazed over on the half-volley.

After two minutes of injury time the referee brought the game to a close with Scotland progressing through their first ranking game.

Next up they face Australia at 4.30pm on Thursday 25 June.

Portugal were victorious over Japan in a match of two halves. The European side eventually ran out 6-2 winners, but despite dominating the first half ultimately the result flattered as a spirited second half performance by Japan mean they finished the game with distinction.

Despite neither team having scored prior to the game, both sides went into the game sensing a realistic chance of grabbing a first victory at the tournament.

Portugal dominated early doors with Tiago Ramos grabbing a first half hat-trick. Japan, for their part, did create opportunities in stages throughout the half with Tenma Inoue’s deflected shot perhaps their best opportunity of the tournament so far.

But Portugal simply had too much power for Japan, and opened the scoring through Ramos - benefiting from an unfortunate collision between Naoyoshi Kagayama and Yuki Soma leaving the striker with an open net to slot home.

The best goal of the half came courtesy of Ramos again, after an intricate passing sequence, with Hugo Pinheiro and Pedro Santos involved in the build up.

Pedro Santos and Pinheiro also got themselves on the scoresheet, with Pinheiro cannoning in a penalty into the roof of the net after Ryuta Yoshino brought down the soon-to-be goal scorer in the box.

But, it was Japan who came out the stronger in the second half with clear intent to display the fighting spirit that had been visible in patches throughout the tournament.

It had looked like Portugal would continue their dominance after Vitor Vilarinho put his side 6-0 up, but the introduction of Yuji Yamada, just after the break, was key to the turn in fortunes of Japan.

Taisei Taniguchi blasted home from close range after a pinpoint cross from Yuki Soma allowed Taniguichi to give his side their first goal of the tournament.

Just moments later, Tetsuya Toda rifled his shot into the top corner from 20+ yards, receiving great cheers from the crowd.

Both sides can be happy with their performances in front of an animated crowd at St. George’s Park. 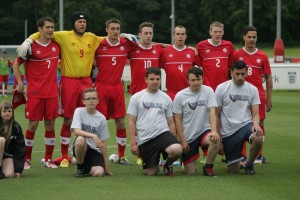 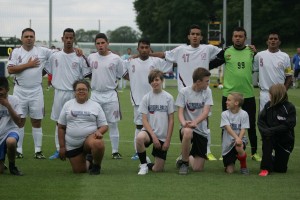 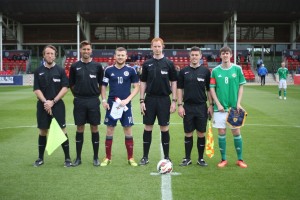 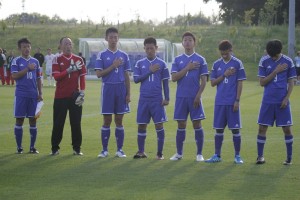 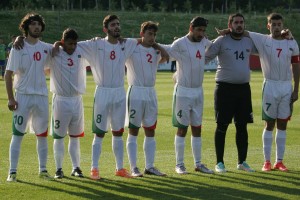