Initially developed in 2014, Frame Football is a new format of the game for those athletes with high support needs who require the use of walking/gait training equipment.

The International Federation of Cerebral Palsy Football (IFCPF) is responsible for the international governance and development of Frame Football, with considerable experience in developing adapted football opportunities for players with physical disabilities.

IFCPF set the objective in our strategic plan to achieve an agreed international format and rules for the game. With this set of rules, we hope to give a uniform approach to developing and playing the game of Frame Football.

In 2014, the game was designed, developed and trialed by Cerebral Palsy (CP) Sport in England, with athletes, parents, carers, coaches and physiotherapists involved every step of the way.

A considerable level of growth of the game in England reflects the huge contribution of Richard Seedhouse who sadly passed away in 2017. The Frame Football Foundation, in partnership with CP Sport, continues to deliver Frame Football opportunities in England in Richard’s memory.

This document states the IFCPF Modifications to the ‘Fédération Internationale de Football Association (FIFA) Futsal Laws of the Game’ which are applicable in all competition for Frame Football.

Subject to the agreement of the national football association concerned, and provided the principles of these Laws are maintained, the Laws may be modified in their application for matches for players of under 15 years of age, for female footballers and for veteran footballers in any or all of the following ways:

Application of the rules

It is fully recognised that at the current development stage of Frame Football, a set of agreed international rules are required in order to start the coordination of competitive Frame Football activity for those players who are now seeking further playing opportunities.

However, for training, development and the grassroots level of the game; the above considerations should be used by coaches to introduce new players whilst maintaining the principles of the laws. 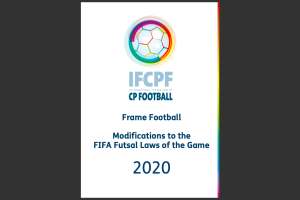